Life was good.Veggie Head Stalker had been crowned a hero and they were saying pretty good things about me as well. There was talk of movie contracts, book deals, television appearances and even the possibility of a Nobel Prize. And Veggie's deal was even bigger. Letterman, Leno, Okra, they all wanted us and everyone who was anyone wanted to rub branches with us. People couldn't get enough of us.

Everywhere we went people were waving money at us in hopes that we might promote some product or pitch some scheme. Why we had more sponsors for our travels than you see on the fenders of a Winston Cup stock car. Veggie was even approached with a multi-million dollar deal from the nation's biggest fertilizer company but turned them down because Veggie only does organic drugs.

Yeah, life was good. No more sailing around the world on junks when we were given free use of world class luxury liners and custom built jet airplanes. Instead of sleeping on the ground, foraging for our meals, drinking rice beer and trying to come up with enough cash to but cheap hookers we stayed in five star resorts, dined in fancy restaurants, drank expensive wines with names I never learned to pronounce, and lounged around the pool every day where scores of really hot chics made no secret about the fact that we could score anytime we liked and the studio would pick up the bill.

What's that? Margarita? Who's Margarita? Oh yeah, the girl back in Mexico. Whatever happened to her?

Everyone returned our calls too. Day or night there was always someone there to do our bidding. If I needed a new pen or a secretary to do the writing there was always someone to jump right up and do the job. If Veggie wanted to go chop down an entire field of cucumbers all he had to do was point and a hundred or more men all armed with Wackemall machetes would jump right up and do the job. It really seemed as if there was nothing in the world that could go wrong.

And the advertising was just a little less intrusive. 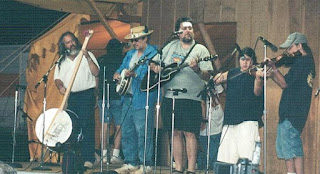 Veggie still had the bug to go on stage and sing a few tunes so we called up some friends in Nashville and asked if we could join them while they cut their next album. Well of course they said yes so the very next week Veggie had me start writing song lyrics in hopes of getting something really original to use for an upcoming bluegrass show at the Grand Old Opry. As we left home that morning on our way to Tennessee I knew Nashville would never be the same again. Veggie sang lead and I did the tenor harmonies while playing stand-up bass to our very own original song...

Some say I should change, eat 'nanners an' 'maters,
but when I want change I eat beans an' 'taders.

"I didn't know Veggie could sing, did you? Is that a hit song or what? Look at all those people giving them a standing ovation Is there no end to Veggie's appeal? Wonder what he'll do next? Stay tuned as the Adventurers of the Vegetable Stalker continue with Veggie, Teen Idol?"