Of course, everything you have read up until this point has been fiction.There was no Vegetable Stalker and everything you've read at VegetableStalker.com is my dreams, asleep and sometimes awake.

And my being owned by my sponsors...

Well that was simply a sellout. No surprise, right?

But what if there had of been a Veggie Head Stalker or some other man or plant with a genuine vision and the courage to follow it? We wouldn't be dealing with vegetarian food containing human DNA had a real Vegetable Stalker been leading us: 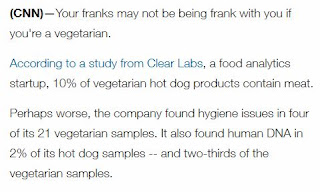 And what if I had chosen to follow such a leader instead of becoming the loser I am today, an old man, alone, sitting at home publishing my stories of what I'd wished I'd accomplished as a young man, online for anyone to read for free? What if I'd chosen to save the world instead of trying to make money? Money that's all gone now. What if...

Men of genuine vision do exist. All of us have met these men at one time or another. Usually they come from the most unlikely of places. And yes, sometimes these men of vision are women-- men with a wo added on.

No matter where these people of vision come from they only need one thing to become leaders: loyal followers who will share in their visions, spread the word and recruit more followers. For you see, my friends, recruiting more followers is the main job of being a follower-- it's how you become a leader and a person of vision in a world full of blind individuals.

In the end, if you think it's more important to become successful so you can pay your bills, live the American dream and take care of your family... For what? You're feeding them poison and indoctrinating them into Fascism and slavery every day. Why would you want to do that? Wouldn't you, your family and the world be better off if you found that man or woman with genuine vision, made him or her your leader and followed? After all, as British Member of Parliament, Tony Benn once said, ''Every generation has to fight the same battles as their ancestors had to fight, again and again, for there is no final victory and no final defeat.''

Maybe Veggie Head Stalker should be our next President.. Could he be any worse than those we've had in the past?

Spread the word, Veggie Head Stalker for President in 2016.